Who is at Fault When a Vehicle Hits a Pedestrian After a Collision With Another Vehicle? 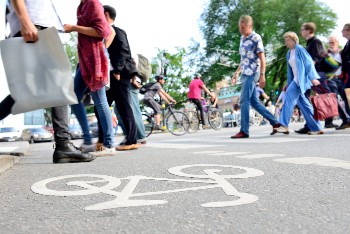 Determining who is at fault when a vehicle is involved in a chain-reaction collision that results in pedestrian injury is complex and will likely involve first responders, official police or transportation investigators, insurance adjusters, and legal representation for the individual motorists. Anyone—drivers, cyclists, or pedestrians—involved in a chain-reaction or multi-vehicle collision that resulted in serious injuries or fatalities is wise to retain legal representation to protect their interests during the investigation and any legal proceedings which may follow.

When Is the Driver at Fault?

If our theoretical driver was driving recklessly, exceeding the speed limit, driving under the influence, and ignoring traffic signals, they are likely to be assigned all of the liability for the accident and will be held responsible for the injuries sustained in the chain reaction that accident caused.

If the driver was intoxicated and driving 20 miles over the speed limit before losing control, striking a car, veering off course, and finally hitting a pedestrian in the crosswalk, it is clear that they are guilty of gross negligence. Even if that individual claims they were not responsible for the pedestrian’s injuries because they would not have hit the pedestrian had they not hit the car first, judges and juries would see that the driver’s negligence caused both the initial accident and the pedestrian’s injuries.

When Is Another Driver at Fault?

Even though the pedestrian’s injuries were directly caused by the impact with the hit vehicle, that driver may share only some of the blame—or none at all— if it can be argued that another driver’s negligence is what led to the initial collision.

Say our theoretical motorcycle, car or truck driver is traveling within their lane, obeying all traffic signals and laws, and moving just under the posted speed limit. As the cyclist or driver approaches an intersection, another car, hypothetically traveling on the same road in the opposite direction and 20 miles above the speed limit, makes a sudden left turn across traffic without signaling. They strike the law obeying driver as they move through the intersection and send the vehicle into the crosswalk where it strikes a pedestrian.

In this case, the hit vehicle may have hit the pedestrian but, legally, that driver did not cause the pedestrian’s injuries. Instead, the injured victim and their attorney must seek damages from the other driver whose grossly negligent behavior caused the accident which caused their injuries.

When Are Both Drivers at Fault?

Comparative negligence allows for the possibility that more than one driver may contribute, in varying degrees, to the same accident. Therefore, they may share some portion of the responsibility and restitution.

If, for example, a motorcyclist was exceeding the speed limit as they drove through the intersection before being hit by the car making the illegal turn, a judge or jury could decide that the actions of the motorcyclist “slightly contributed” to the accident, even though the driver of the car was mostly to blame. In this case, the pedestrian and their attorney must negotiate with both the driver and the cyclist to receive compensation for their injuries.

When Is the Pedestrian at Fault?

Contrary to popular belief, pedestrians do not always have the right of way. This is another complexity of comparative negligence: if the pedestrian behaved in a way that was negligent of their own safety, a judge or jury could determine they share a portion of the responsibility for their own injuries.

For instance, if the pedestrian was crossing the street in the middle of the block rather than the crosswalk, lawyers for the driver’s insurance company may argue that the pedestrian voluntarily put themselves at risk and is therefore partly responsible for their injuries. In that case, even if the jury determines the driver to be primarily at fault, they will decrease the compensation the at-fault driver must pay by an amount they determine is equivalent to the extent to which the pedestrian’s negligence contributed to the problem.

Get Help From an Experienced Attorney

As a pedestrian, your best hope for full and just compensation is to contact an established, experienced attorney to represent your interests during the investigation of the accident, the negotiation with insurance companies, and the argumentation in court. Contact our offices online or call 425-399-7000 to schedule a free consultation to learn how Max Meyers can work for your rights and well-being following an accident, no matter how complex.