Your Legal Options After a Head-on Motorcycle Collision in Kirkland

If you've been injured in an auto accident, you should schedule a free consultation with a Washington auto accident lawyer today. We know how difficult getting through situations like this can be. That’s why our experienced legal team at Max Meyers Law wants to help guide you—as we have helped guide many of our clients throughout Bothell, Kirkland, and the surrounding areas.

To schedule a free consultation, you can give us a call at 425-230-5732 or contact us online. You can also fill out the form below or chat with a member of our team.

Every motorcyclist knows that the biggest danger on the road is other drivers. While many bikers do their best to anticipate danger, even the most experienced rider cannot avoid every accident. When other people are reckless, distracted, or intoxicated, they put everyone around them at risk. Motorcyclists, unfortunately, are among the most likely to be seriously injured—even killed—by another person’s momentary lapse in judgment.

Although every Washington motorcycle accident has the potential to end in injury, some crashes are more likely to have life-altering outcomes. In general, head-on collisions are among the most common and the most dangerous. 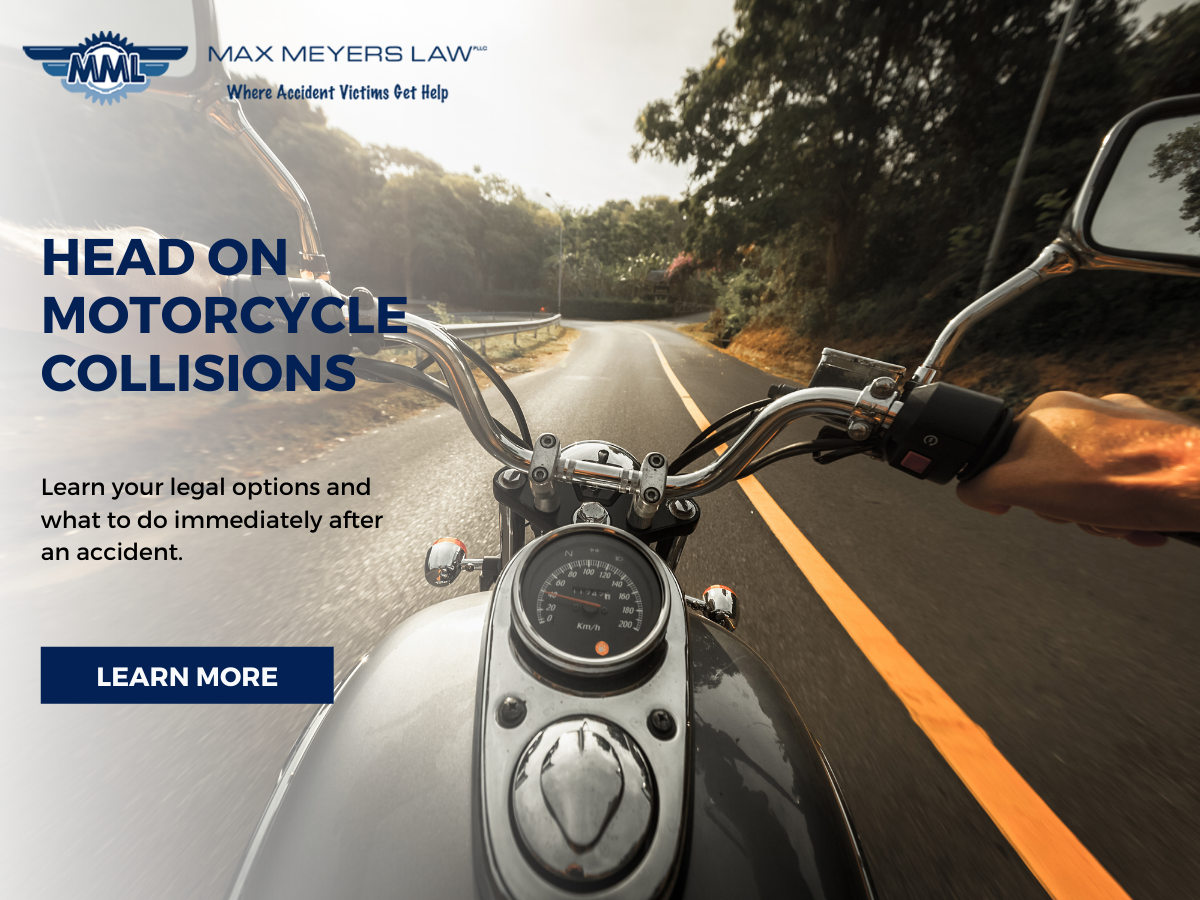 A head-on crash happens when two vehicles traveling in opposite directions collide with one another. This could occur when:

Irrespective of how these accidents happen, they often end in catastrophic injury. Traffic researchers have found that of all fatal motorcycle accidents involving more than one vehicle, 78% could be categorized as head-on collisions.

Many motorcycle accidents could be avoided if other drivers were more attentive. Head-on collisions are no different. The following factors are often present in head-on motorcycle crashes where the other driver is found to be at fault:

Since motorcyclists lack the protection of vehicle frames, airbags, and bumpers, their bodies often bear the full force of a crash. They could be ejected from their motorcycle, hitting a guardrail, tree, or telephone pole, or becoming trapped underneath another vehicle. This could lead to injuries including:

What to Do After an Accident

If you have been injured in a head-on motorcycle accident that was not your fault, you could be entitled to significant compensation through an insurance claim or personal injury lawsuit.

However, insurance adjusters, judges, and juries are often biased against motorcycle riders. They might doubt your story or assume that your own misconduct somehow contributed to the accident and led to your injuries. You could bolster your chances of making a successful legal recovery by:

If You Were Hurt in a Seattle-Area Motorcycle Crash, Contact Max Meyers Law

Max Meyers Law is dedicated to representing the victims of negligence. We have helped injured motorcycle riders across Seattle, King County, and Western Washington fight for their rights, winning six-figure settlements for bikers hurt by negligent and aggressive drivers.

Max Meyers Law could help you, too. Please send us a message online or call us at 425-970-8822 to schedule your free, no-obligation consultation.